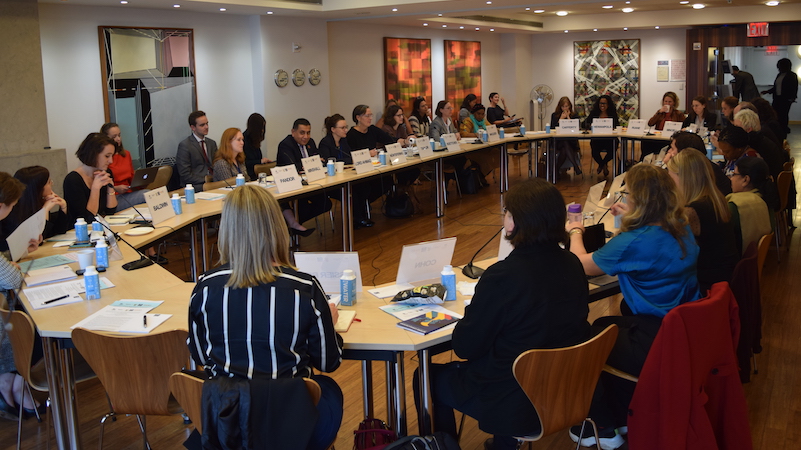 The UN Security Council adopted the landmark resolution 1325 on women, peace, and security (WPS) in 2000 and since then, the international community has made notable strides toward implementing the WPS agenda through member state commitments. However, in recent years, the world has witnessed backsliding on these commitments and a backlash against robust attempts at women’s inclusion and gender parity.

On October 29th, experts on WPS gathered at an IPI roundtable to launch and discuss the findings of a new report from Gender Action for Peace and Security (GAPS), “The 10 Steps: Turning Women, Peace and Security Commitments to Implementation.” The report includes recommendations for action on women, peace, and security as the 20th anniversary of resolution 1325 approaches.

The “10 Steps” report is the product of consultations with over 200 organizations in conflict-affected states. It recommends precise and actionable steps for realizing the WPS agenda, with a particular focus on the role of civil society. GAPS and its partners found that commitments on Women, Peace and Security are “vast and comprehensive,” but that “in practice this has not translated into the inclusion of gender perspectives and women and girls’ rights in policy and programming.”

Participants began the discussion by addressing the current state of the WPS agenda, especially noting the regression on gender parity and women’s inclusion in formal peace processes. Despite considerable progress on women’s inclusion in peacekeeping, discussants lamented that “it has been easier to get women into military, police, and peacekeeping forces on the ground than to get women into negotiating rooms.”

When women are excluded from peace processes, it was noted, the resulting peace agreements include few or no gender provisions. Accordingly, the WPS agenda has aimed to improve gender inclusion in peace negotiations in order to strengthen the outcomes of such processes. Initially, some progress was made. Before resolution 1325, only 11% of peace agreements made any references to women and gender, but in the following 14 years, this number went up to 27%. However, since 2014, the number has dramatically decreased.

The roundtable then shifted its focus toward ways to engage civil society in implementing the WPS agenda, as the GAPS “10 Steps” report stressed. Participants acknowledged that governments are not the only drivers of the agenda, and civil society continues to play a vital and integrated role in its actualization. Civil society provides insight that guides state action, and it helps governments stay in touch with challenges to implementation on the ground. Moreover, where state action is often slowed by bureaucratic processes and political tensions, civil society helps to push the agenda along and accelerate progress.

When considering what the next steps member states should take on WPS, participants called for action on an array of issues, including the need for gender-conflict analysis, addressing violence against women, and changing social norms around gender.

The work remaining for the international community, participants argued, is ensuring accountability to the commitments outlined in the nine WPS resolutions that have been adopted by the Security Council. Though the agenda is often thought of as a “gender issue” or “security challenge,” it has much broader implications than these characterizations suggest.

“We are all guardians of this incredible WPS agenda,” agreed participants, and its realization will require creativity and widespread action.