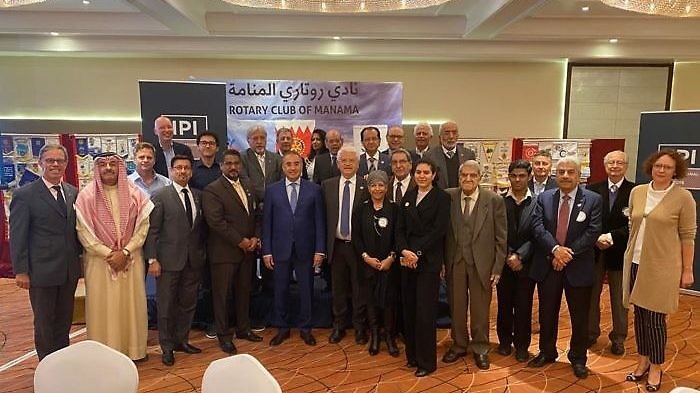 At a time when the value of multilateralism is being questioned, IPI MENA Director Nejib Friji called for further commitment to the multilateral system to help reinforce regional cooperation, sustainable development, and peace in the Middle East and North Africa.

Mr. Friji addressed private sector representatives, businesspersons, and members of the Manama and Salmaniya Rotary Clubs as a guest speaker at a February 2nd meeting on “Regional Integration and Peace in the MENA Region.”

Highlighting the European Union’s formation following the tragic World Wars as a prime example of regional cooperation, he called out the need for a homegrown initiative in the MENA region. “There is a pressing need to address challenges collectively and to create an environment conducive to solving the crises we see today,” he stated.

Mr. Friji underlined key IPI initiatives that focus on managing risk and building resilient societies through IPI’s mandate of preventive diplomacy and commitment to multilateralism, and pointed specifically to IPI’s key Regional Integration project for this part of the world.

Mr. Friji also emphasized the importance of IPI’s Water Diplomacy initiative as a fundamental area of focus within Regional Integration, as well as, among others, IPI’s Culture of Peace, Interfaith Dialogue, and MIKTA initiatives.

Concluding the interactive session, Mr. Friji thanked the Rotarians for their longstanding support to peace and welcomed partnerships between IPI and the Rotary Club. He encouraged participants to support the multilateral system. He also emphasized the need for investing in regional cooperation to build resilient, stable, and sound societies.