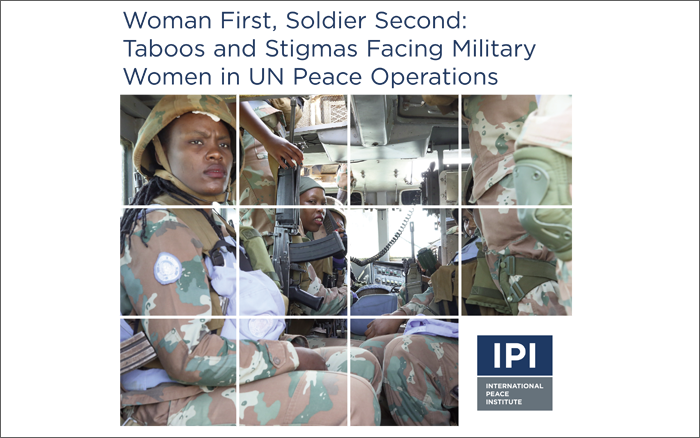 Only 6 percent of all uniformed military, police, justice, and correctional personnel in United Nations field missions are women, and IPI Vice President Adam Lupel asked, “After 20 years and ten Security Council resolutions, why is it still so hard to increase the participation of uniformed women?”

Jody Thomas, Deputy Minister of the Department of National Defence, Canada, introduced the discussion with an account of her own personal experience as a beginning officer. “I went aboard my first ship completely confident in my ability to be an excellent and equal shipmate. Not everyone agreed. There were some who were adamant that my gender was a weakness that they were being forced to accommodate, and they were angry about it. Their words and actions reinforced that I was not welcome, that there was something wrong with me actually wanting to be on a ship.

“That behavior was and is a reflection of a deeply rooted stigma that it is somehow wrong and inappropriate for women to serve in uniform. This kind of resistance to women in service—words, actions, attitudes—persists, and all that is rooted in the same stigma and taboos: women should not serve in combat roles; they should be out of the way; serving in ways that are not dangerous. Our country and our armed forces have made a lot of progress since those days, and it was a long time ago, in terms of our policy and our approach, but we have more to do to fight stigmas here in Canada and in countries around the world.”

Deputy Minister Thomas reported that Canada and Norway had pioneered a new barrier assessment methodology for police and military organizations and that the Canadian Armed Forces would be undergoing this assessment in the coming months.

Lotte Vermeij, Senior Adviser to the Norwegian Armed Forces and author of the report, said she had interviewed 142 women from 53 countries across 11 UN missions ranging in rank from private to major general. She said she addressed three levels: (1) the individual and community levels (2) within national defense structures and (3) during deployments to UN Peace Operations.

As an example of the mindset they face, Dr. Vermeij said, “Women are often seen as less feminine and less marriageable by their communities.” She quoted a military woman deployed to the UN mission in the Democratic Republic of the Congo, who had told her, “The community sees us as masculine, angry, and more aggressive than normal civilian women as we are trying to fit in with a male-dominated culture. At the same time, single women may be seen as promiscuous, while mothers are often perceived as neglecting their families.”

Another military woman told her, “I witnessed multiple cases of inappropriate behavior that made me feel more unsafe within the walls of the mission than outside.”

Dr. Vermeij said that women’s lack of authority and their minority status within the force made it very difficult for them to report and address these issues. “Women who did speak up were often discouraged from making official complaints and were sometimes even bullied and isolated.”

In pushing back, Dr. Vermeij said, “Women use a range of strategies, including sharing information with their families and friends, working harder to prove themselves and sometimes isolating themselves during deployments to avoid certain situations. They also turn to formal and informal support structures.”

“Unfortunately,” she added, “the burden of change often falls on individual women themselves rather than on institutions. Not surprisingly, these dynamics perpetuate the underrepresentation of women, military peacekeepers in UN missions.”

Among the recommendations she said the interviewed military women made were “the UN Department of Peace Operations should strengthen narratives on the importance of female peacekeepers in mission, ensure that all peacekeepers respect UN values, develop mission-specific general strategies and plans, engage more firmly with troop-contributing countries, make recruitment and selection processes more gender-sensitive, hold personnel accountable for discriminatory and sexualized behavior, and establish in-mission support systems.”

Major Kristy Hudson, Military Training Officer, UN Department of Peace Operations, said that women had to be alert to signs of discrimination, even seemingly small ones, and to signal their robust refusal to tolerate it. “This isn’t just about overt harassment, this is about the tiny moments that leaders let go past every day, and there’s a great saying that I love, ‘The standard that you walk by is the standard that you accept.’ If you are silent when a woman is dismissed as a leader, you are telling the team a woman can be ignored. So let this ‘bystander effect’ drive leadership in missions from the junior leader to the most senior leaders, and we will tackle a lot of these stigmas.”

Major Hudson said that women were wrongfully suspected of resisting deployment. “If someone says they don’t want to deploy, it won’t be because they don’t want to deploy, it would be because there is a barrier. Find out what that barrier is and what your organization is doing about it. In most cases, it’s actually about parenting issues that men and women both need support with. So address that. Consider unconscious bias because a lot of the decisions we make are not intentional, we just haven’t thought about it from the other side whether it’s an intersectional issue or a gender issue.”

Dr. Vermeij said her research bore out the view that women wanted to deploy, and not just in reduced roles. “We sometimes hear this argument that women don’t want to deploy. From the interviews, I can tell you that they do want to be deployed in those roles and they certainly want to be deployed, for example, at military observer sites.”

Major General Kristin Lund, formerly Head of Mission, UN Truce Supervision Organization, and Force Commander, UN Peacekeeping Force in Cyprus, also dismissed the notion that women were not willing to deploy. “When it comes to ‘females don’t want to be deployed,’ I think that’s a myth. When Norwegians deployed to Afghanistan, they came back and said, ‘We need them, we cannot solve the problems out there without the women.’ It has to be shown that these women are able and capable of doing what men are doing.” She pointed out that career advancement often depended on it. “In your career, you need to be deployed if you went to have a future.”

Major Hudson brought up an area where women’s needs were exasperatingly not taken into account. “Only yesterday, I had a so-called military expert argue with me that it was a waste of time to make sure that military equipment was adapted to meet the requirements of women. His view, and I’ve heard it many times before, was that it was unreasonable that a female soldier should expect to have vital protective equipment, in this case, a helmet that actually fit her sufficiently to protect her skull while not slipping down and obscuring her vision and preventing her from performing her duties as a soldier. And that blows my mind.”

Major General Lund outlined the challenges that military women faced in becoming leaders. “For me, now a retired major general in the Norwegian Army, it took me 15 years to find my leader philosophy. Why? Well, your only role models were men, and you saw what kind of values they appreciated to get you promoted. But by hard work, I got stronger and wiser and managed to lead the way I wanted to be led.”

She illustrated how the particular challenges for a woman leader remain even once you’ve assumed responsibility. ‘When I was Force Commander in Cyprus, I had to check, for example, which were the troop- contributing countries where prostitution was illegal. For me, that was an indicator of men’s attitudes towards women. And I had to pay more attention to give guidelines to those contingents and their commanders. I changed that, providing doors to lavatories, curtains in front of the urinals, and separation walls in containers, small simple changes that you can make. The sub-commanders understood my intention and removed inappropriate posters in the gyms.”

Major Hudson called for more attention from the UN and troop-contributing countries to the recruitment and training of military women. ”If a country is to be serious about deploying women and treating them with respect, they must deliberately seek to grow this cadre using the same care and attention they use to grow the male workforce. That is in training, career development, in coaching and mentoring, and that means building from the ground. And if we want female sector commanders and force commanders, we need to start recruitment. Countries must show that women are taken seriously as military personnel, and that they’re not being deployed merely as quotas to be met.”

Wing Commander Kennealy said that military women had developed among themselves successful informal means of being effective and independent in a male-dominated world. “Women, experiencing the stigmas and taboos highlighted in this research identified that in the first instance, rather than raise issues with their chain of command, they often seek assistance from talking to other women through informal networks. This highlights that leadership and networks in no way operate independently of each other. These networks will often develop out of necessity driven by women as a result of a lack of leadership or the inadequacy of systems and policies that support a diverse work force.”

Ms. Kennealy theorized a general reason why there was a need for these networks. “Military organizations are by their very nature striving for uniformity, and they have generally been designed on a male career model that doesn’t allow for the flexibility of career breaks or other policy interventions that help to support and maintain women in their careers alongside their male cohorts.” At the same time, she cautioned against overdependence on these informal networks. “It is critical that through these associations, we do not perpetuate the idea that the need for the structural change to improve the conditions and experiences of our women is just women’s business as this simply is not correct. It is the responsibility of commanders and capability managers to seek policy changes to achieve enabling capability and mission success.”

Lieutenant Colonel Nomthandazo Ditire is a former military intelligence officer for the South African National Defense Force who now serves as a military planning officer at the Military Planning Service of the Office of Military Affairs (OMA) at the UN Department of Peace Operations. She is concerned at the relatively few numbers of women in the higher ranks.

“And mission-specific gender strategies should be more than simply having a woman on a planning team or in a decision-making role, but should look to the benefits of women at all levels in the mission across the different functions and within the military contingents themselves. Women should not just be doing medical or logical or logistical or administrative work, but also can be effectively training combat readiness and also in engagements. Women should be playing a vital role in intelligence gathering and also patrols and physical operations.”

After hearing from the other military women on the panel, she remarked that it could have been depressing listening to the personal accounts of the damaging effect that taboos and stigmas had on women, but that instead she had come away inspired by what she had heard.

“Potentially this commonality of experience could be perceived as deflating – that the issues of stigmas and taboos are too widespread and too ingrained in military culture to change. However, I look at this unity of experience and understanding reported by these women as something very different, and in fact, I see this commonality of awareness as a real opportunity.