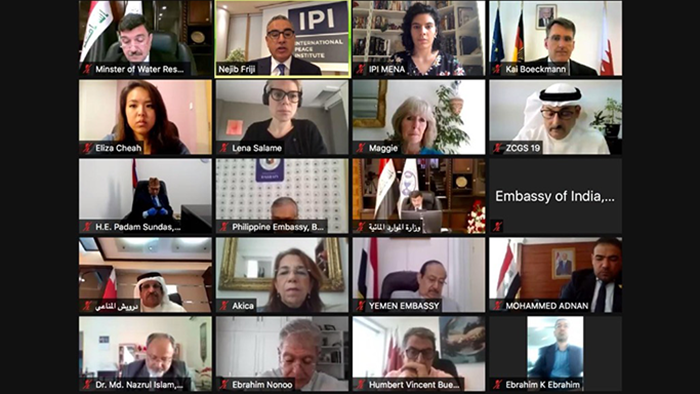 In a webinar organized on March 22, 2021 under the theme “MENA Water Challenges: An Opportunity for Regional Cooperation,” IPI MENA Director Nejib Friji underscored the need for a multi-layered, coherent and comprehensive approach to unleash the potential of water as a tool for regional integration and cooperation. The event coincided with World Water Day.

During his keynote address, Mr. Mahdi Al-Hamdani, the Iraqi Minister of Water Resources, acknowledged the growing challenges the region faces, citing population growth, urban expansion, and climate change in addition to security and political challenges, pointing to Iraq’s Tigris and Euphrates regions as examples. He called for unified awareness, cooperation and effective management of water resources at all levels of the multilateral system in order to achieve the United Nations’ sustainable development goals related to water.

Ms. Akissa Bahri, former Tunisian Minister of Agriculture, Water Resources and Fisheries, stressed that the MENA region’s strategy for water security should focus on “strengthening collaboration and integration” among countries in the region. She pointed to the North African aquifer system as an example of a sustainable, regional cooperative management system via Algeria, Libya, and Tunisia’s collective action in successfully garnering support and funding from international bodies.

Ms. Lena Salame, Conflict Management Specialist at Geneva Water Hub (GWH), poignantly reminded the audience that “unlike other resources, there is no alternative for water.” She said only through committing to the water agenda, might we “mobilize political will – it is the key ingredient to making the [UN’s humanitarian, peace, and sustainable development] agendas move forward.”

Mr. Waleed Zubari, Professor of Water Resources Management at Arabian Gulf University (AGU), raised the dilemma on the perception of water’s “value” in the Gulf region—one of the most water stressed subregions—where its value is often equated to price. The region’s reliance on desalination bears high costs on the financial, economic, and environmental fronts.

Mr. Maruan El-Krekshi, Head of MENA Department at Crisis Management Initiative (CMI) in Finland, shared his organization’s efforts in water diplomacy, particularly with regard to their conflict resolution activities. He highlighted the efficacy of using water as an entry point to convene relevant actors in the region to cooperate within and beyond the context of conflict in the region, drawing from CMI’s work in Libya since 2015.

Among those who took part in the discussion were Raji Unnikrishnan from Bahrain daily newspaper, Gulf Daily News (GDN); Mr. Ebrahim Nonoo, President of the Association of Gulf Jewish Communities; Ms. Arwa Kooli, journalist from Dar Assabah; and Joanna Meyer, a water advocate.

The event was hosted by the IPI MENA office. As a key instrument of peace, water remains at the top of IPI MENA’s Regional Integration project.