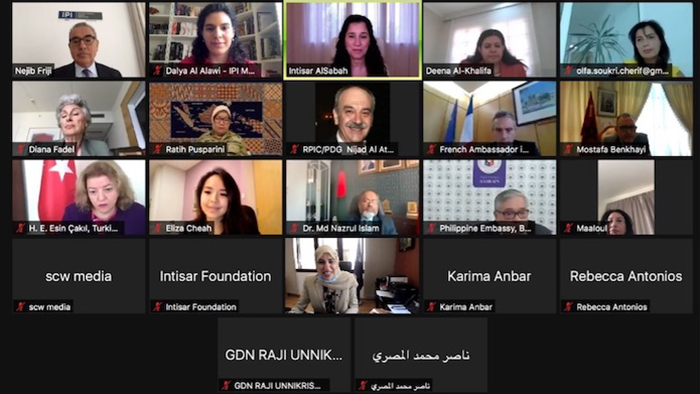 On August 11, 2021, IPI MENA hosted an online discussion entitled “Empowerment of Young Women in the MENA Region,” attended by leading women from across the MENA region, as well as officials and diplomats. The event, held on the occasion of International Youth Day, called for invigorated efforts to empower young women in the region and around the world.

IPI MENA Policy Analyst Dalya Al Alawi opened the event by emphasizing the adversely gendered impact the pandemic has had on women in all aspects of life, but particularly within the various economic, social, and political conexts of the region.

IPI MENA Research Assistant Eliza Cheah highlighted the need for cooperation across all levels of the multilateral system. She emphasized the need “to change the prejudices and social norms, to remove all the obstacles, and provide women with the best access in all spheres,” in order to achieve the Sustainable Development Goals by 2030.

H.H Sheikha Intisar Al Sabah of Kuwait, Founder of Intisar Foundation, explained the various creative tools that are used by her foundation, especially dramatherapy, in the context of conflict as well as peacebuilding. She said its impact at the community level as an engaging and non-stigmatized activity helps women build confidence and express themselves, supporting their ability to cope with problems. She stated the key role of women in cementing the societies’ fabrics, adding that fully involving women would generate sustainable peace in the Arab World.

H.E Sheikha Deena bint Rashid Al Khalifa, Assistant Secretary-General of Bahrain’s Supreme Council for Women (SCW), listed her country’s efforts to empower women and girls by ensuring their rights, especially in the context of the COVID-19 pandemic, which enabled the SCW to uphold the gender balance in response to the challenges of the pandemic and beyond. She noted that “Bahrain was able to maintain the percentage of women in the labor force at 53%,” which enabled the economic participation to spike.

University Professor Olfa Soukri, former Vice-President of the Global Parliamentary Network of the World Bank and IMF, and former Tunisian Parliament member, regretted how the pandemic has exacerbated the disproportionate challenges women have had to face, and as a former lawmaker, she reiterated the role that her colleagues have in creating a framework to protect gender equality. She called on all young women and men to be engaged citizens, and “be committed to promoting women’s empowerment.”

Ms. Diana Fadel, Founder of Foundation Diane for “civic awareness & eco-sustainable development,” decried the barriers that women are up against, especially within the context of multiple crises facing Lebanon now. She underscored the importance of providing girls and young women with the option to make their own choices in the world of work and home. Referring to the perception that, “behind every successful man there is a woman,” the honorary member of the Women Leaders Council of Lebanon said that women should be acknowledged as standing equally beside men.

Lt. Colonel Ratih Pusparini of Indonesia’s National Defense and Security Agency said as the first woman peacekeeper officer from Indonesia, her presence as a woman in the UN’s peace forces enabled contingents to “win the hearts and minds of local people,” as in most conflict settings, those disenfranchised are usually women, youth, and elderly. She said “with our various backgrounds, we can encourage the younger generations, to follow our steps and do more.”

French Ambassador Jerome Cauchard referred to UN Women’s “Generation Equality Forum,” held in Paris last month, that launched a five-year plan worth $40 billion in commitment to the women’s agenda. He stressed that education is always the starting point for change. In the same vein, Ms. Yusra Mouzughi echoed the importance of education, as the President of Bahrain’s Royal University for Women, and the equal need to plant the same messages of women empowerment in boys, as it is to girls. She referred to RUW’s research center created in partnership with the UNESCWA and SCW, as a valuable resource and platform for IPI and other partners to explore.

Before closing the discussion, IPI MENA Director Nejib Friji reiterated how such platforms are the first steps in connecting like-minded individuals and entities to wider networks. He stressed IPI’s commitment to women’s development, and called for all experiences and recommendations, beyond speeches, and be put into action to make a real impact in the region, and across the multilateral system.