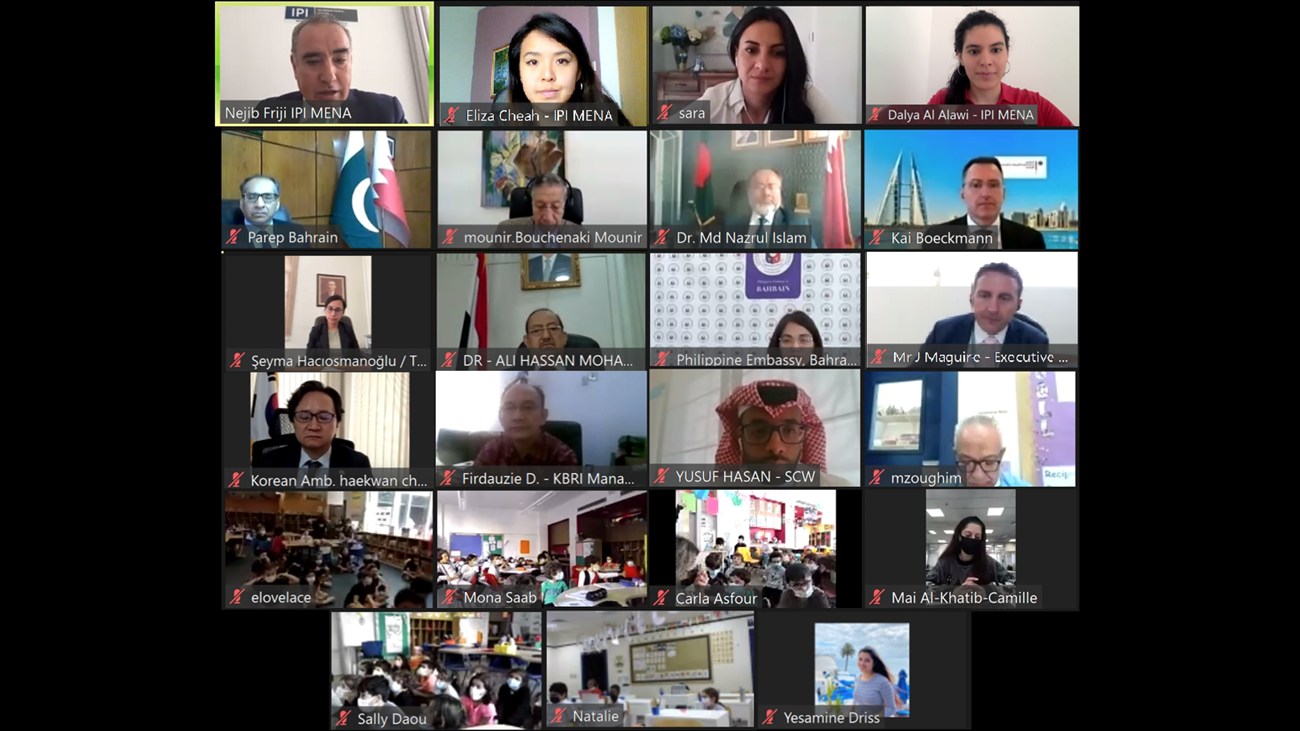 In the leadup to the United Nations upcoming Climate Change Conference in Glasgow, better known as COP26, IPI MENA hosted a webinar on October 27, 2021, entitled “MENA’s Youth and Environment,” to highlight the importance of involving and educating youth regarding environmental issues.

IPI MENA Director Nejib Friji pointed to how “young people are engaging with climate and biodiversity science and policy in a way that previous generations haven’t.” He added, “the aim must not be just to educate, but to also inspire and engage the children in bringing a positive behavioral change.” Such steps are necessary in order to create a positive cycle and generation of climate activists dedicated to sustainable development, he stated.

Ms. Ghannoum’s new book “Tom Alien and the Plastic Mess,” is devoted to raising awareness on the dangerous effects of environmental pollution amongst children. Following her reading, she recalled a short anecdote of her 6-year-old son’s reaction to her book, to demonstrate how youth-led action is significant for the fight against climate change. As the future generation, “we need their drive and creativity to take action and solve the environmental mess we have created.”

Her reading was followed by a question-and-answer segment, raised by the young participants, which revolved around how to start the recycling conversation with adults, which items were recyclable, and what they can do to start making a change. Throughout her responses, Ghannoum addressed their concerns, and encouraged the students to educate those around them, and to “keep raising your concern, and don’t give up!”

In his remarks, Executive Director of British School Bahrain, Mr. John Maguire commended the school’s ‘eco warriors’, an initiative spearheaded by students to raise awareness and take action in ensuring all members of the school community – pupils, teachers, and parents – are more environmentally friendly. He also noted the school’s community-driven initiatives, such as beach clean-ups, where they are partnering with private companies to recycle and renew the collected materials. In addition to plastic waste, Mr. Maguire also shed light on the school’s commitments to reduce food waste.

H.E. Muhammad Ayub, Pakistan’s Ambassador to Bahrain, explained how “as the world’s fifth-youngest country, with youth comprising 53% of the population, making Pakistan green and clean is a priority.” He shared his country’s vulnerability to climate change, and their campaign to plant 10 billion trees by 2028, reiterating how “youth are the vanguards of this movement,” and their crucial role globally, to help our world.

Similarly, German Ambassador Kai Boeckmann shared an example from his country, where it is becoming an increasingly common practice, and importantly so, for young people to hold politicians and other leaders in society to account, especially with regard to climate action. He referred to one of the most viewed television shows during Germany’s ongoing elections, was where children aged 10-12 years old were being posed to candidates.

Mounir Bouchenaki, Advisor to Bahrain Authority for Culture and Antiquities and the United Nations Educational, Scientific and Cultural Organization (UNESCO), recited UNESCO’s purpose to conserve both the world’s cultural and natural heritage, wherein “education is the pillar for all transformation in the world.” “The awareness,” as raised by Ms. Ghannoum’s book, “is important,” he stressed. It is through such coordinated actions by all countries at COP26, that will result in a cleaner and more agreeable planet.

On the same note, Mr. Friji closed the event in wishing a successful COP26 summit to call on all leaders to heed the global calls for action through clear programs, initiatives, and strategies to save our planet from scorches of climate change.

All audience members praised the enthusiastic participation of the students and commended Ms. Ghannoum’s book as an example of how to engage younger children in making a change and being advocates for climate action. The event was attended by; British School of Bahrain, Bahrain, International College of Beirut, Lebanon, and American School of Dubai, United Arab Emirates, and includes the ambassadors of Bangladesh, Korea, Philippines, and Yemen, alongside other members of Bahrain’s diplomatic corps, media, as well as civil society.