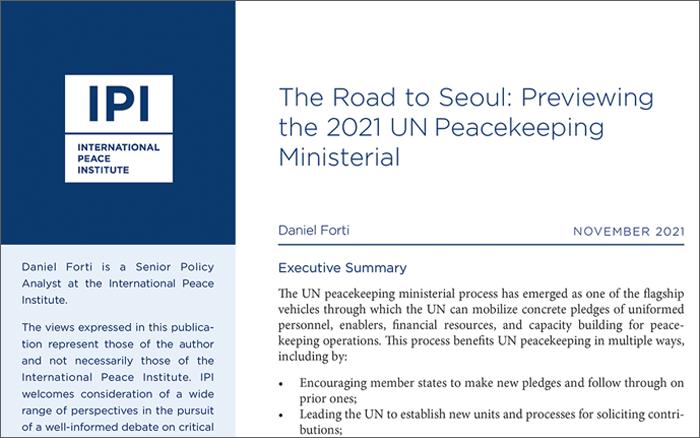 On November 16th, IPI together with the Permanent Mission of the Republic of Korea to the UN cohosted a virtual policy forum on “The Road to Seoul: Previewing the 2021 UN Peacekeeping Ministerial.”

The Ministerial has emerged as one of the flagship vehicles through which the UN can strengthen the inherently global partnerships that underpin peacekeeping operations around the world. The Seoul Ministerial also comes at a particularly crucial time for UN peacekeeping as it continues its efforts to implement reforms and evolve. Significant preparatory work has unfolded over the past year in the lead-up to this process. The co-chairs have convened four Preparatory Conferences, each discussing a specific topic that will feature prominently during the Ministerial Conference. The UN Secretariat has prepared a pledging guide for member states as well as a capabilities-assessment study.

This virtual policy forum provided a preview of the core issues that will be discussed at the 2021 Ministerial Conference. It contextualized the importance of the Ministerial process within broader efforts to encourage the evolution of UN peacekeeping operations. It also highlighted the progress achieved over the past seven years and defined expectations for the upcoming summit. The policy forum offered summaries of the Preparatory Conferences convened over the past year. IPI also launched an issue brief, prepared by IPI Senior Policy Analyst Daniel Forti, on the Peacekeeping Ministerial.