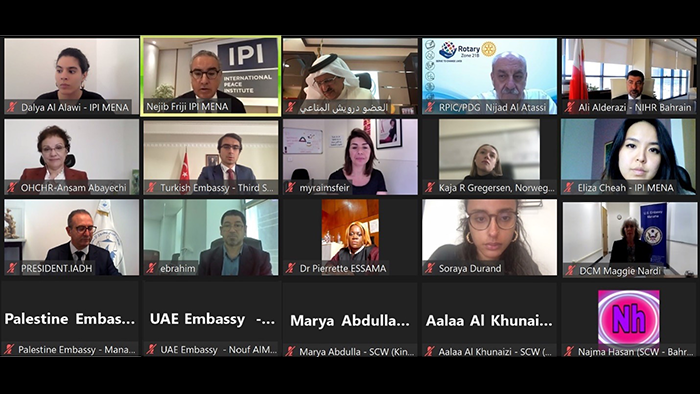 In a webinar hosted by IPI MENA on February 23, key experts, policymakers, and practitioners highlighted the importance of good governance in upholding human rights in order to achieve regional integration.

The event, entitled “Good Governance for Regional Integration,” was opened by IPI MENA Director Nejib Friji stating that “we are at a critical juncture of history’s timeline into a new era: the importance of cooperation and integration as a region has never been more pertinent.”

In his keynote speech, Mr. Abdelbasset Ben Hassan, President of the Arab Institute for Human Rights raised the importance of education policies in the promotion of human rights. Further to education system reforms in the Arab world, the chairman of the Tunisian National Committee for the support to Refugees also emphasized the need to “move from vague ideological approaches of regional integration and one to realistic policies based on trying to achieve human rights, democracy, and integration in the region.”

Mr. Abdelbasset Ben Hassen called upon the cooperation of the MENA countries on this matter, which he states “begins with human rights,” recommending first steps as the development of human rights systems and reforming policies that include as well as recognize all groups of civil society.

Mr. Ali Ahemed Alderazi, Chairman of the National Institution for Human Rights in Bahrain, stressed the central role that education plays in the promotion of human rights both nationally and regionally. “[Regional Integration efforts] won’t happen without a proper education of human rights.”

Ms. Myriam Sfeir, Director of the Arab Institute of Women based in Beirut, Lebanon, highlighted the need to implement a gendered lens in political activity – referring to specific successes in Lebanon. She offered recommendations which are to look at human rights holistically, making sure that the mechanism for policy implementations exists, and prioritize gender rights. “We need to make sure that women are included in decision-making bodies.”

Dr. Pierette Essama, Doctor of Law and Professor at the University of Yaounde II in Cameron, explored the concepts of governance, human rights, and regional integration in the context of Africa. She stressed that “regional integration is part of the solution” to the rising social and political grievances in the region, noting many of national and regional shortcomings were due to the laxity of the rule of law. She emphasized the need for cooperation to achieve common objectives. “When we have concerted efforts at the regional level, we can fully attain our objectives.”

Ms. Ansam Abayechi, Regional Gender Advisor at OHCHR based in Beirut, Lebanon, underscored the importance of regional integration in the promotion of human rights in achieving the UN’s Sustainable Development Goals. She highlighted the significance of the GCC as a subregional body for the MENA region for regional integration efforts. “They have a weight in decision making for this regional organization.”

The webinar concluded with a short question-and-answer segment, where Mr. Friji acknowledged the call for further interaction with regional bodies and asked about what the realistic approaches to do so would be in the MENA region. Mr. Abdelbasset Ben Hassan stressed the need to adopt a holistic approach to human rights. He noted that “in our region, there are many initiatives activated” but there is a more important need to share a common responsibility to promote human rights. “We need a real regional dialogue in which we develop an inclusive program for the region.”