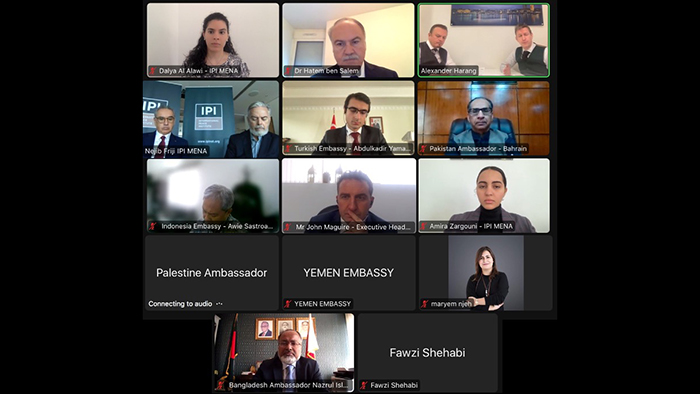 In a webinar organized on December 1st by IPI MENA, experts and key players called upon governments, regional organizations, and policymakers to further invest and reform the education system to build resilient societies and pave the way towards regional integration and greater cooperation.

The webinar, entitled “The Scandinavian Example – Integration through Education & Peace: Lessons to be Learned,” was opened by IPI MENA Senior Director Nejib Friji, who underscored that regional integration reinforces cooperation and solidarity to address the existential crises that the world faces, such as financial recession, climate change, rising populism and in particular, the education crisis. He pointed to the success of the EU experience and their commitment to education as an example to consider when developing homegrown approaches in the MENA region.

Dr. Asle Toje, Deputy Chairman of the International Peace and Understanding (IFF) and Deputy leader of the Norwegian Nobel Committee, contextualized the Scandinavian experience in using education as a critical tool to bring an end to the cyclical wars in Northern Europe. As a peaceful yet vital component to reinforcing bilateral relations between neighbouring countries, education played an important role in accelerating conflict resolution in the Scandinavian region.

“Integration started step by step, it started on a very low level,” Dr. Toje noted. “We did introduce passport-free travel, allowing for greater exchange among educational institutions, allowing the Nordic countries to learn from each other.”

Professor Alexander Harang, Chairman of the Board of IFF, emphasized the Scandinavian region’s high ranking in the Global Peace Index and pointed to education as a key factor in this regard. Highlighting UNICEF and UNESCO’s definition of peace education as “a process of promoting the knowledge, skills, attitudes and values needed to bring about behaviour that enable people to resolve their conflicts peacefully,” he pointed to Norway as an interesting case study by looking at the aspect of their knowledge system through peace academia, the skills as performed in Norwegian peace diplomacy, and the attitudes and values through the perception and self-image of Norway as a peace nation.

“It is interesting to note that modern day peace academia originated from Oslo, Norway,” Professor Harang said, underlining the integration of peace research within most universities in the country. “This practical approach of incorporating peace academia ensures a moral component and commitment to peace. Keeping peace as the ideal affects how you do research.”

Stressing the need for a humanistic approach to education, Professor Harang noted Scandinavian countries’ culture of peace. “Education institutions are also cultural institutions,” he said, underlining that education, as a result, is fundamental in promoting peace.

Dr. Hatem ben Salem, former Minister of Education of the Republic of Tunisia, Director of the Tunisian Institute for Strategic Studies (ITES), and member of the International Institute for Strategic Studies (IISS) in London, noted that Tunisia under Bourguiba’s presidency was the departure point of democratizing reforms of education. He underlined, however, that Tunisia’s model of education today faces both the issue of growing demography and a mismatch between the learning outcomes of education systems and the required skills for the labour market.

“We should place peace at the core of the curriculum, especially in the fight against violent extremism. In order to succeed, Tunisia’s potential must be supported by political will to operate both on gender equity and investment in technology,” he stressed.

On the matter of cooperation in the region, Dr. Ben Salem urged for greater collaboration between Maghreb Education Ministers, underlining that for peace to thrive, it is critical to conjugate freedom of expression and education.

H.E. Mr. Antonio Patriota, former Foreign Minister of Brazil and current Ambassador of Brazil to Cairo, highlighted Norway’s role in the Columbia peace process as one of the few situations in Latin America that is inscribed in the UN Security Council, while also underlining Tunisia’s position as the only Arab country to have established full equal rights for men and women via inheritance law.  He also pointed to Brazil as a good example of a large nation that has been at peace with all its neighbours since the 1870s and underlined Brazil’s heavy investment in diplomacy education as a key reason behind this success.

“One should not equate role models for peace with highly developed or wealthy nations necessarily. We know historically that some of the most war-waging nations were the most developed at their times,” Mr. Patriota said. “Wealth and development do not go hand in hand necessarily with the promotion of peace, just as poverty should not be associated with the violence and instability of war.”

Patriota noted the importance of education and culture for peace and outlined his role as a rapporteur of the Leaders pour la Paix, an organization created by former French Prime Minister Jean-Pierre Raffarin. “Multipolarity in itself will not ensure a more peaceful world. It will offer opportunities for peace and for multilateralism to function better, but this needs to be tapped into through leadership and education,” he noted.

Diplomats from Yemen, Pakistan, Türkiye, Indonesia, Palestine, and Bangladesh, as well as representatives from academic institutions in Bahrain and Tunisia, took part in the webinar.