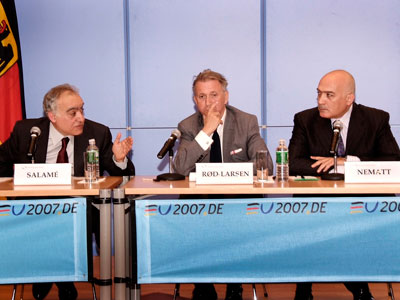 The Middle East is in a deep crisis at present. Israelis and Palestinians may be discussing ways to overcome a long-reigning standstill in the peace process, but even with US and international help, many difficult issues remain.

Lebanon continues to be in political turmoil and confronts broader issues related to its sovereignty, territorial integrity, and political independence that remain at the top of the agenda in the aftermath of the 2006 war with Israel. There is also much debate over Syria’s role and position in the region, with a view to Lebanon, with regard to the Israeli-Palestinian arena, and as concerns the occupied Golan Heights. There is also a connection to Iran, which has raised many concerns in the international community over its nuclear program. In addition, there appears to be increasing tension between Iran and the Sunni-Arab world or, as some argue, between Shiites and Sunnis more broadly, over Iran’s relations with individual groups and states, which seem to draw the present regional system and balance of power into question. On top of those domestic and regional tensions, there is a deep involvement of the international community, and much debate and controversy surrounding it, not least in Iraq. Against this background, the panelists will address the various fault-lines and interrelated dimensions of crisis in the Middle East, with a view to domestic, regional, and global dynamics, or, in other words, petrol, politics, and prophets.

Our panelists included Ghassan Salam, Professor of International Relations at the Institut d’études Politiques, Paris and former Minister of Culture of Lebanon and Salameh Nematt, Washington bureau chief of Al-Hayat newspaper, and LBC satellite channel and former head of the Strategy Unit at the Jordanian Royal Court.

The event was chaired by IPI’s President Terje Rød-Larsen.