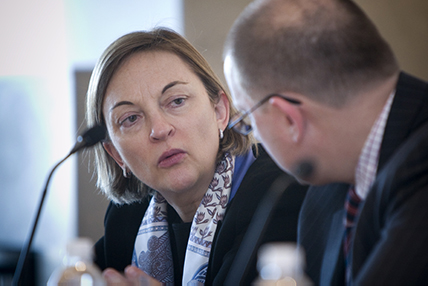 On April 10th, Yasser Abed Rabbo, Secretary-General of the Palestine Liberation Organization, and Haim Ramon, Vice Premier of Israel, gathered with a diverse group of UN Ambassadors and other select guests for a roundtable discussion on the Middle East peace process post-Annapolis. The session was chaired by IPI President Terje Rød-Larsen.

The event was the first in a new IPI series, the Forum on World Affairs. Each of these off-the-record meetings will focus on a major issue of international peace and security and will offer an opportunity for dialogue with leading personalities from around the world.

As well as being the opening session of the Forum on World Affairs, the event was the first in IPI’s new state-of-the-art conference space, the Tyrgve Lie Center for Peace, Security, and Development. The center will be formally inaugurated next month at an event with UN Secretary-General Ban Ki-moon.

Yasser Abed Rabbo has been a member of the PLO’s Executive Committee since 1971. Since that time he has actively participated in shaping the organization’s political agenda, especially on matters concerning the peace process. Mr. Abed Rabbo worked on the Palestinian Peace Initiative in 1988, the Madrid Peace Conference in 1991, the Oslo Accords in 1993, and the Geneva Initiative in 2003. He is the third secretary-general of the PLO, having succeeded Yasser Arafat and Mahmoud Abbas.

Haim Ramon has served in the Knesset since 1983. A member of the Labor Party for many years, Mr. Ramon joined Kadima in 2005. Mr. Haim has held several ministerial positions in the Israeli government. In 1992, he was Minister of Health, in 1995 and 2000, Minister of the Interior, and, in 2006, Minister of Justice. Mr. Ramon has long been an important partner in the Middle East peace process working with Prime Ministers Rabin, Peres, Barak, Sharon and Olmert. He was appointed Vice Premier in July 2007.