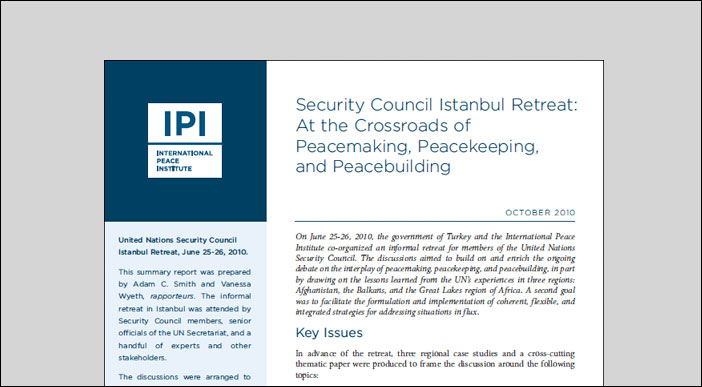 This meeting note draws on the discussions held during the informal retreat of the UN Security Council in Istanbul, Turkey on June 25-26, 2010. The retreat was co-organized by the government of Turkey and the International Peace Institute.

The Istanbul dialogue aimed to build on and enrich the ongoing debate on the interplay of peacemaking, peacekeeping, and peacebuilding, in part by drawing on the lessons learned from the UN’s experiences in three regions: Afghanistan, the Balkans, and the Great Lakes region of Africa. A second goal was to facilitate the formulation and implementation of coherent, flexible, and integrated strategies for addressing situations in flux.

In addition, the discussions set the stage for a formal meeting of the Council held on September 23rd. IPI continued its collaboration with the Permanent Mission of Turkey in the lead up to the September high-level Council summit.

Convened by Abdullah Gül, President of Turkey, whose country held the rotating Council presidency in September, the summit was attended by nine heads of state and government, and six foreign ministers, as well as UN Secretary-General Ban Ki-moon. During the debate, the Council pledged to continue strengthening all its activities in the maintenance of international peace and security, and to adapt them to ever-changing circumstances.

According to the presidential statement, Council members welcomed the considerable progress made in recent years in refining and strengthening the preventive diplomacy, peacemaking, peacekeeping and peacebuilding capabilities of the United Nations. They pledged to cooperate more closely with regional organizations and other partners, and to provide the necessary political support so integral to achieving the UN’s objectives in the field.