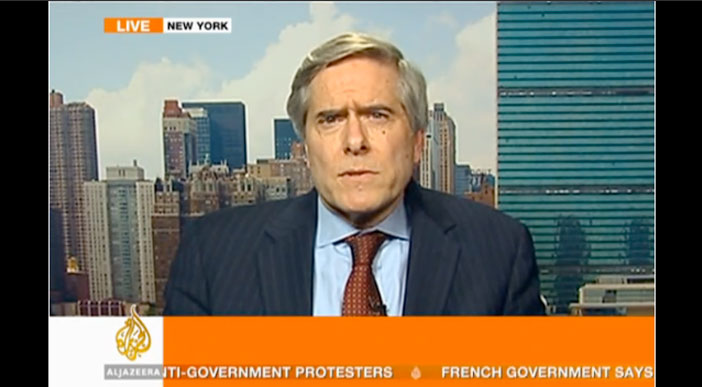 Asked on Al Jazeera on February 23rd if crimes against humanity were being committed in Libya, Dr. Edward C. Luck, IPI Senior Vice President for Research and Programs, said that though “we don’t have direct access, there is certainly good reason to believe” they were.

Dr. Luck, who is also a UN Special Adviser to Secretary-General Ban Ki-moon for Responsibility to Protect (RtoP), said that the international community has directly told Col. Muammar Qaddafi and his entrenched regime what is expected of him, and that the Secretary-General made these concerns clear during a forty-minute phone call with the Libyan leader.

Dr. Luck said that Col. Qaddafi and his associates have to know that they are “very much isolated in the international community” and that they are adopting a bunker-like mentality with “no good way out.”

“States were created to protect people, not to persecute them,” he said. “And certainly when you order aircraft and random fire and bring in mercenaries against unarmed protesters, you’ve violated so many international laws, and clearly, he has to be held accountable, and others in his regime do for, what looks like at least, crimes against humanity.”

On March 15, 2011, Dr. Luck was quoted in the Christian Science Monitor as saying, “It’s true that Qaddafi’s particularly egregious actions have spurred the international community in ways that another crisis might not have, and that has forged a unity in the organization that we don’t see every day. But we’re also seeing the invoking of universal norms and standards that go to the heart of what the UN is about, and that’s something you wouldn’t have imagined even a few months ago.”