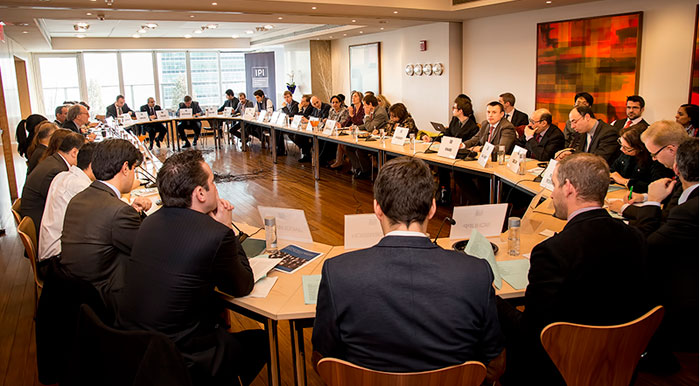 In the lead-up to the Yemeni National Dialogue due to begin March 18th, IPI hosted a roundtable discussion on the topic on February 13th with Amat al-Alim al-Soswa, former Assistant Secretary-General, Assistant Administrator, and Director of the Regional Bureau for Arab States at the United Nations Development Programme; and Gregory Johnsen, former Fulbright Fellow in Yemen. Cathy Shin, Special Assistant to the UN Special Adviser on Yemen, also offered her observations.

The following are highlights from the discussion:

1. Political Fragmentation and Uncertainty: Division, fragility, and weak governance characterize most areas outside Sana’a, while in the capital, several factions dominate the political landscape. Participants viewed the status of the ruling General People’s Congress party as weak but also pointed to a lack of coherence in the opposition coalition, as new alliances form and newcomers enter the scene.

2. Humanitarian and Security Challenges: With alarming water scarcity, almost half the population living under poverty line, 5 million children suffering from malnutrition, and increasing IDPs, the humanitarian situation in Yemen is dire. Security is deteriorating amid several small wars, internal tribal disputes, and assassinations. The president has made bold efforts to restructure the armed forces, which may provoke a backlash.

3. National Dialogue Agenda: Key issues that need to be addressed include the formation of a new political system; the thorny Southern question (complicated by divergent voices within the Hirak movement); and tensions in the northern Sa’ada province (beyond a limited focus on Houthis).

4. Representation and Inclusivity: Key governorates like al-Jawf, Shabwa, and Marib, as well as key constituents like tribes and businessmen, are not adequately represented in the National Dialogue. There is a need for mechanisms to secure buy-in from those not represented.

5. Consensus and Trust: Reaching consensus in the National Dialogue will be difficult, but multiple mechanisms can be employed to attain it. Nonetheless, there is a perceived lack of trust, as groups continue to jockey for power behind the scenes.

6. Role of Regional and International Actors: The international community is expected to support the National Dialogue and help ensure it is a “national” process. The UN continues to coordinate international assistance as per the Implementation Mechanism and reference in Security Council Resolution 2051, and it has played a key role in providing technical and political facilitation. Concerns remain that regional powers could increasingly be drawn into the situation, providing weapons and financial support for different groups.

In general, participants expressed concern about the lack of a back-up plan should the National Dialogue fail. It was also stressed that the government should pave the way for a successful dialogue by ensuring proper representation and with the appropriate support of the international community.