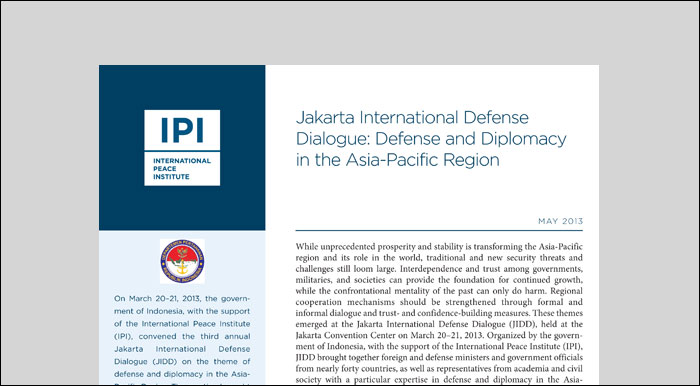 This meeting note summarizes the discussions held at the third annual Jakarta International Defense Dialogue (JIDD), which was convened by the government of Indonesia with the support of IPI. The meeting brought together foreign and defense ministers and government officials from nearly forty countries seeking to promote intergovernmental cooperation in addressing common threats and challenges.

While unprecedented prosperity and stability is transforming the Asia-Pacific region and its role in the world, traditional and new security threats and challenges still loom large. Interdependence and trust among governments, militaries, and societies can provide the foundation for continued growth, and regional cooperation mechanisms should be strengthened through formal and informal dialogue.

The meeting note addresses key insights raised at the 2013 JIDD: the new geopolitics of the Asia Pacific, economics and security, evolving security threats, maritime challenges, migration and trafficking, and the modernization of the region’s militaries.

Read more about the meeting >>

Why the 21st century will be the Asia-Pacific century: IPI/JIDD video >>