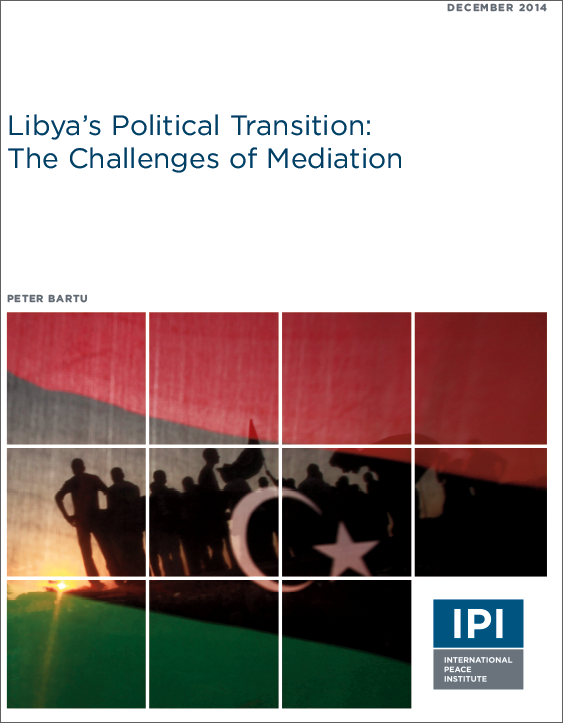 As two rival parliaments and administrations in Tripoli and Tobruk currently vie for control of the government in Libya, a new UN-brokered initiative is attempting to renew a national dialogue process.

How and why did the previous UN mediation effort to support the Libyan-devised political transition lose legitimacy, with Libya now on the brink of civil war?

This report explores the unsuccessful attempt to mediate a peaceful resolution of the Libyan conflict in 2011 by the UN, and, after the fall of Tripoli, attempts by the UN Support Mission in Libya (UNSMIL) to support and mediate Libya’s transition to constitutional government. It chronicles how mediation efforts were thwarted by a multitude of often diametrically opposed transition approaches, and an inability to preserve and protect the mediation space from the revolutionary war effort and its supporters.

The author argues that the real challenge for mediation was convincing Muammar Qaddafi to accept a genuine political transition in Libya, with an added complexity resulting from the different voices within the revolutionary camp and their competing visions of a new Libya. The report goes on to examine how, despite Libyan actors determining most aspects of the transition, the UN and Libya’s bilateral supporters could have better anticipated the impact of Qaddafi’s legacy, namely the absence of institutions and the lack of experience with political compromise.

The report concludes by offering lessons learned for mediation and recommendations, including the importance of having only one mediation effort and, where possible, having it mandated by Security Council resolutions. It also calls for a re-imagined national dialogue process and a renewed engagement by UNSMIL that considers an enhanced political-military mediation capacity to help the Libyans establish more stable security arrangements across the country.

This is the third in a series of papers on mediation.

Other papers in this series