Approximately 40 percent of school-age Syrian refugees in Jordan are not getting an education. As the Syrian war has entered its fifth year and humanitarian actors seek to bridge short-term humanitarian assistance with longer-term development goals, about 80,000 Syrian refugees in Jordan are still falling through the cracks when it comes to education.

The author suggests a number of entry points for overcoming these obstacles. For example, improving employment opportunities for refugee parents would create the conditions at home that enable children to be sent to school. This could include granting Syrian refugees limited permits to work in certain jobs where they would not compete with the Jordanian labor force. In addition, easing refugees’ registration requirements or issuing an international document that grants access to basic services could facilitate more regular enrollment in education. 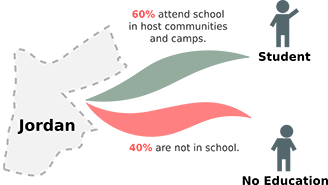