A man holds a Colombian flag with white stripes during a demonstration in support of the peace agreement between the Colombian government and the FARC-EP, Bogotá, Colombia, November 30, 2016. (Guillermo Legaria/Stringer.)

On November 24, 2016, the government of Colombia and the biggest guerrilla group in the country, the Fuerzas Armadas Revolucionarias de Colombia–Ejército del Pueblo (FARC-EP), signed a final peace agreement. This accord put an end to the longest armed conflict in the Western Hemisphere and to long and convoluted peace talks. 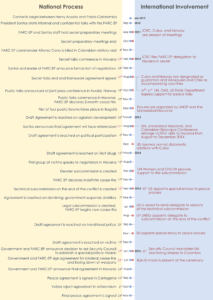 What elements of the process contributed to its success? While it may be too early to properly speak of “lessons learned,” IPI’s latest paper highlights the key elements that seemed to have worked and those that made progress difficult. Over the course of the process, several factors emerged as central, both to its successful resolution and to the problems likely to arise during implementation:

Read about the launch event>>