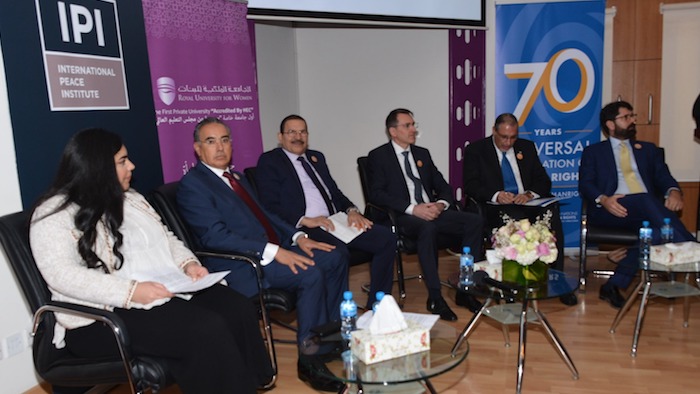 How can we build on the achievements of the Universal Declaration of Human Rights (UDHR)? This was the topic of this January 29th forum entitled “The UDHR: A Legacy Continued for Development and Human Rights Protection.” The event marked the 70th Anniversary of the Declaration, which was December 2018.

The forum was held at the Royal University of Women (RUW) in collaboration with the National Institute for Human Rights (NIHR); the Ombudsman’s Office, United Nations Bahrain; the Embassy of the Federal Republic of Germany to the Kingdom of Bahrain; and IPI MENA.

Dr. Pasquale Borea, Dean of the College of Law at RUW, stressed the educational value of the declaration as a seminal international legal instrument whose influence can be seen in  regional conventions, national legislations, and instruments of soft law.

“Spreading knowledge and awareness of the UDHR among the youth can be an antidote to extremism, radicalism, and intolerance,” Dr. Borea stated. “It represents a fundamental step to inculcate values such as dialogue, respect, and tolerance in the next generation.”

Focusing on Article 7 within the Declaration, United Nations Resident Coordinator Amin El Sharkawi underlined its connection to the fifth Sustainable Development Goal, gender equality, and the role women played in conceptualizing the UDHR.

Mr. Sharkawi highlighted the roles of Hansa Mehta of India, Minerva Bernardino of the Dominican Republic, and Begum Shaista Ikramullah of Pakistan who fundamentally transformed the UDHR by including women.

German Ambassador to the Kingdom of Bahrain Kai Boeckmann offered examples of how his government urged companies to implement human rights. He also highlighted the private sector’s responsibility in upholding and promoting human rights.

Noting that International Holocaust Remembrance Day was on January 27th, Mr. Boeckmann pointed to the achievements of the international community in working together following the mass violations of human rights. “We need to resolutely defend all that we have achieved,” he stated.

After noting the gender imbalance on the panel, moderator and IPI MENA Director Nejib Friji gave the floor to IPI MENA Program Assistant Dalya Al Alawi to deliver IPI MENA’s statement and reiterated the importance of including women and youth to build on the legacy of the UDHR.

Ms. Al Alawi emphasized the connection between respect for human rights, peacefulness, and “positive peace,” and she advocated for the participation of women and youth in leadership to whom the 2030 Agenda’s pledge to “leave no one behind” applies.

Mr. Abdulla Ahmed Alderazi, Vice Chairperson of the NIHR’s Council of Commissioners reminded citizens and civil society of their duties to uphold human rights and in particular the importance of Article 29 of the UDHR.

Mashael Al Qutami, Specialist Investigator at the Ombudsman Office, pointed to the timeliness of the UDHR and drew on the example of how the 1970s international feminist movement gave way to the Convention on the Elimination of All Discrimination Against All Women (CEDAW), a significant treaty born from the UDHR.