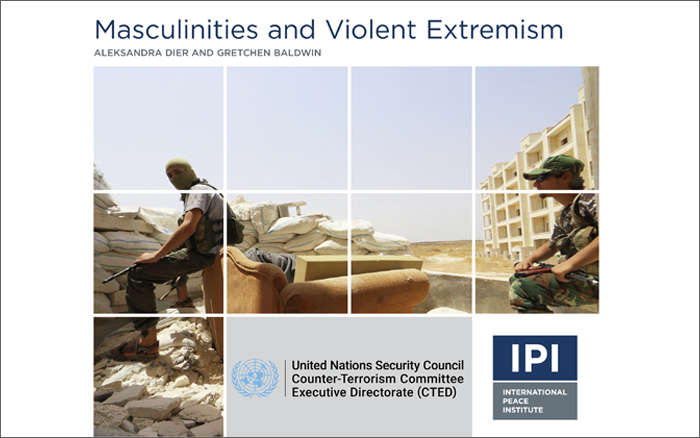 Gendered analyses of violence often focus narrowly on women and overlook the importance of understanding masculinities. To bridge this gap in understanding, IPI in partnership with the UN Security Council Counter-Terrorism Committee Executive Directorate (CTED), the Permanent Mission of Mexico to the UN, and the Stockholm International Peace Research Institute (SIPRI), cohosted a policy forum on “Masculinities in Peace and Security.” The November 30th event convened researchers, practitioners, and policymakers for a focused discussion on masculinity and violent extremism.

The UN Security Council held an Arria-formula meeting in July 2021, chaired by Mexico with the co-sponsorship of Estonia, Norway, the United Kingdom, and the United States, to discuss how gender stereotypes, masculinities, and structural gender inequalities influence terrorism and violent extremism. Specifically, this Arria-formula meeting explored the ways in which understanding masculinities could promote better prevention of, and response to, violent extremist and terrorist groups.

This policy forum presented the key findings of the IPI and CTED report and provided policymakers and researchers with an opportunity to reflect on the relevance of focusing on masculinities in preventing and countering terrorism and violent extremism. “This is not a niche topic,” said David Scharia, Chief of Branch at CTED, in his opening remarks. “We must continue to strengthen our understanding of gender perspectives and gender inequalities in violent extremism.”

The discussion further emphasized the need for masculinities analysis and expansive thinking about gender. “Gender often becomes shorthand for ‘women,’” said Fionnuala Ní Aoláin, Special Rapporteur on the Promotion and Protection of Human Rights and Fundamental Freedoms while Countering Terrorism. “However, the construction of masculinity is incredibly relevant to work on violent extremism.” The policy forum concluded by exploring areas for future growth, including further research on LGBT issues and the rights of the child.