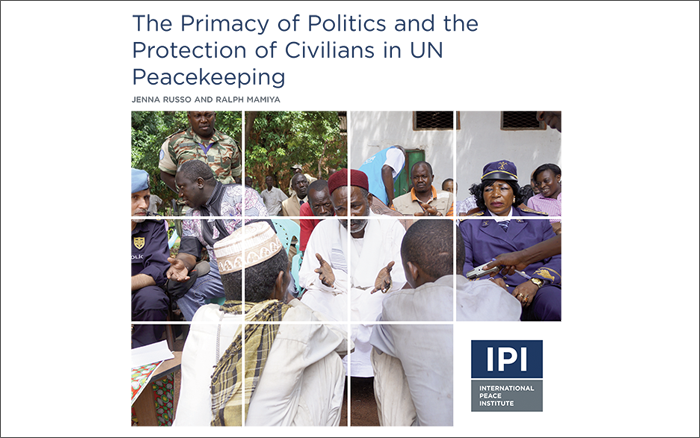 While the UN Security Council and member states have elevated the protection of civilians (POC) and the primacy of politics as two central pillars of UN peacekeeping, it is not always clear how missions are expected to pursue these two sets of priorities together. To discuss the relationship between these pillars, IPI together with the Permanent Mission of the Kingdom of the Netherlands to the UN cohosted a policy forum on December 8th, entitled “The Primacy of Politics and the Protection of Civilians in UN Peacekeeping.”

Support to political processes and the protection of civilians (POC) are the two most prominent mandated tasks for multidimensional UN peacekeeping operations, emphasized in recent independent reviews and elevated by member states and the Security Council. However, despite being foundational pillars to contemporary UN peacekeeping, it is not always clear how these two sets of priorities fit together in planning and operations. Policy guidance and independent reviews stress the need to link mission political priorities and protection, yet within missions, POC is often considered parallel to the mission’s political work and is not always effectively incorporated into the political vision for the mission.

The event examined how missions’ political and POC work are understood in relation to one another and considered opportunities for strengthening both formal and informal integration. This discussion focused primarily on opportunities to strengthen integration at the mission level, for example in planning and analysis, good offices and mediation, and local-level processes. It also considered challenges, such as when the host state is among the perpetrators of violence, when high levels of violence are ongoing, or when there is a lack of a formal political process. “State actors can be so diverse, and it is important to understand the breadth of actors you have to engage with, instead of painting the government with a broad brush,” said Regina Fitzpatrick, Protection of Civilians Team Leader in the Policy, Evaluation and Training Division, UN Department of Peace Operations. Speakers also reflected on the importance of clearly defining the meaning of political primacy, and the challenges of navigating both diplomacy and accountability.

The policy forum launched the IPI policy paper on the “The Protection of Civilians and the Primacy of Politics in UN Peacekeeping” written by Jenna Russo, Director of Research and Head of the Brian Urquhart Center for Peace Operations at IPI, and Ralph Mamiya, IPI Non-Resident Adviser. This event and publication are part of IPI’s broader workstream on Action for Peacekeeping+ (A4P+), funded by the Kingdom of the Netherlands.