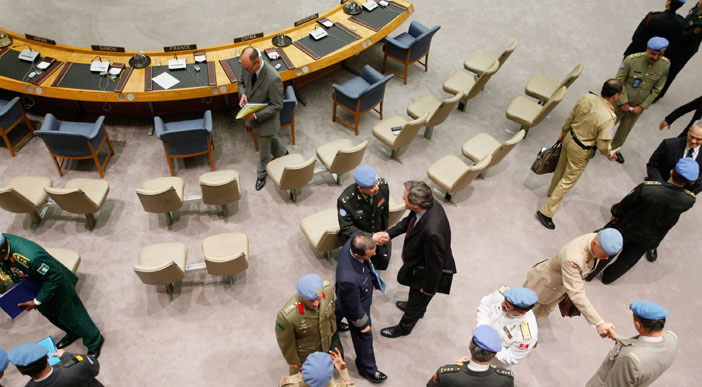 Contributions by Gareth Evans, Edward C. Luck, Susan Rice, Terje Rød-Larsen, Michael Spindelegger, and others in this publication provide an in-depth analysis of the policy, process, and practice of the UN Security Council in protecting populations from genocide, war crimes, ethnic cleansing, and crimes against humanity. The launch of this collection of essays occurs shortly after the adoption of Security Council Resolution 1970(2011) on February 26, 2011 on the situation in Libya, which recalls the responsibility of the government to protect its population and thus echoes paragraphs 138 and 139 of the 2005 World Summit Outcome Document on RtoP.

This collection of essays demonstrates that the Security Council’s role in implementing the responsibility to protect is not limited to taking collective action against mass atrocities (pillar three of RtoP). The publication shows that the Council can also make important contributions to encouraging and helping states exercise their responsibility to protect populations from genocide, war crimes, ethnic cleansing, and crimes against humanity (pillar two of of RtoP). By mandating UN peace operations to support security and justice sector reforms, the Security Council fosters national protection capabilities in states emerging from conflict, which typically face a high risk of relapse into mass violence. When the Security Council mandates peace operations to support the disarmament, demobilization, and reintegration of former combatants it also strengthens the fabric of a postconflict society. By pursuing early engagement and preventive diplomacy the Security Council can encourage governments to address concerns and to mitigate risks before mass atrocities materialize.

The publication was prepared by Christoph Mikulaschek, Senior Policy Analyst at IPI, and Hans Winkler, the director of the Diplomatic Academy of Vienna, which publishes the Favorita Paper journal.

Contributions to the Favorita Paper:

The United Nations Security Council and the Responsibility to Protect: Policy, Process, and Practice. Report from the 39th International Peace Institute Vienna Seminar on Peacemaking and Peacekeeping, Christoph Mikulaschek

Taking Stock and Looking Ahead – Implementing the Responsibility to Protect, Edward C. Luck

The Responsibility to Protect: Consolidating the Norm, Gareth Evans

The Responsibility to Protect and Protection of Civilians: The Human Rights Story, Mona Rishmawi

MONUC and Civilian Protection in the Democratic Republic of the Congo, Alan Doss

MONUC as a Case Study in Multidimensional Peacekeeping in Complex Emergencies, Patrick Cammaert

MINURCAT’s Role in Supporting Chad in Attaining the Objectives of the Responsibility to Protect, Rima Salah

You can order a hard copy of the Favorita Paper on the website of the Diplomatic Academy of Vienna.

You may also be interested in IPI’s recent publication on a related topic: The United Nations Security Council and Civil War: First Insights from a New Dataset by James Cockayne, Christoph Mikulaschek, and Chris Perry (September 2010)